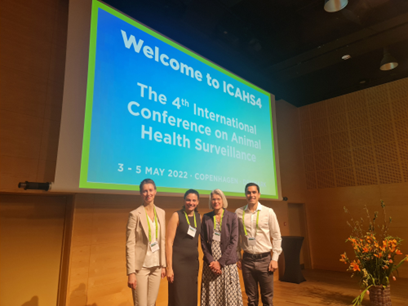 It has been a while since the DECIDE project team was able to meet fellow scientists and stakeholders in person – but with life picking back up, on-site meetings & conferences did too. Accordingly, members of the DECIDE consortium started to present the project at events in front of real people instead of computer screens.

Most recently, from May 3 to May 5, 2022, the 4th International Conference on Animal Health Surveillance took place in Copenhagen, Denmark. Apart from the local project partners of the University of Copenhagen (UCPH), several other DECIDE members were on site, including Prof. Dr. Gerdien van Schaik (UU), Dr. Jenny Frössling (SVA), Dr. Fernanda Dorea (SVA), and Dr. Victor Oliveira (NVI).

Under the titles “The DECIDE project: from surveillance data to decision support for farmers and veterinarians” and “Developing an interactive dashboard for monitoring mortality in Norwegian Atlantic salmon farming”, Gerdien van Schaik and Victor Oliveira presented the project and gave insight on ongoing project work in the field of salmon.

What’s next? In early June, the DECIDE project consortium will get together in Zurich, Switzerland, for a two-day general assembly meeting to discuss the progress, milestones and next steps forward.